The First Amendment Coalition (FAC) has filed a lawsuit against the City of San Diego and the San Diego Police Department to obtain records about policies, rules and procedures they use for Stingray surveillance.

NBC 7 reported evidence that local law enforcement use the technology in April. The Stingray is manufactured by Harris Corporation and is described as a device “capable of tracking the signal of cellular telephones even if the person has disabled GPS capabilities.”

“We believe the SDPD has an obligation to tell San Diego citizens that it is using this invasive technology and to describe the steps it is taking, if any, to protect citizens’ privacy rights,” said Peter Scheer, FAC’s executive director.

Earlier this year, NBC 7 obtained a 2009 federal grant application that shows the City of San Diego was interested in purchasing the cell phone tracking equipment. Court documents revealed, in September of that year, the U.S. Department of Justice made the grand funding available.

FAC, which is represented by Los Angeles attorney Kelly Aviles, filed the suit to force the San Diego Police Department to disclose the records.

NBC 7 spoke to Aviles Tuesday who said, in response to the coalition’s request for information, SDPD turned over only a single, heavily-redacted invoice for the agency’s apparent purchase of the Stingray in December 2012 for $33,000.

NBC 7 reached out police Tuesday evening and was told all comment had to come for the City Attorney. Gerry Braun, spokesman for the San Diego City Attorney’s Office, issued this statement:

“The City of San Diego is aware of the U.S. Department of Justice’s direction that information regarding the equipment must not be disclosed because to do so would potentially endanger the lives and physical safety of law enforcement officers and adversely impact criminal and national security investigations. The City is obligated to follow that direction and will do so absent further direction from the Department of Justice or a Court Order.”

Stingray Tracking Devices: Who’s Got Them?

The map below tracks what we know, based on press reports and publicly available documents, about the use of stingray tracking devices by state and local police departments. Following the map is a list of the federal law enforcement agencies known to use the technology throughout the United States. The ACLU has identified 47 agencies in 19 states and the District of Columbia that own stingrays, but because many agencies continue to shroud their purchase and use of stingrays in secrecy, this map dramatically underrepresents the actual use of stingrays by law enforcement agencies nationwide.

Stingrays, also known as “cell site simulators” or “IMSI catchers,” are invasive cell phone surveillance devices that mimic cell phone towers and send out signals to trick cell phones in the area into transmitting their locations and identifying information. When used to track a suspect’s cell phone, they also gather information about the phones of countless bystanders who happen to be nearby. Click here for the latest ACLU news and analysis on stingrays. 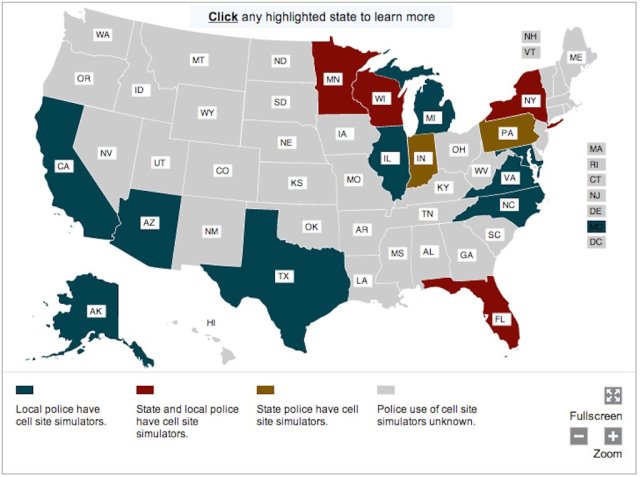