Protesting in a Police State: How to Stay Safe When Exercising Your Rights

If you’re planning on participating in a peaceful demonstration or protest keep one thing in mind, at any time it could be escalated by police violence.

So what should you do if suddenly rubber bullets, tear gas canisters, and flash bang grenades are whizzing past you and a hundred Mad Max extras waiving clubs start goose-stepping in your direction?

The following will provide you some tips and advice to keep you as safe as possible should you suddenly find yourself in a war-zone.

Clothing
When the storm troopers make their appearance at your protest march, you’ll notice they came dressed to kill. They typically wear helmets, face shields, gas masks, chest protectors, elbow pads, knee and shin pads, and combat boots. In addition, they will carry shields, batons, Tasers, radios, medical kits, shotguns and pistols. Meanwhile, you are standing there in a t-shirt and flip flops. The first tip is to come dressed for the occasion.

Long pants and long sleeves to reduce the exposure of skin to RCAs. (Riot Control Agents)
Wear only cotton or wool. Natural fibers are fire resistant whereas most of the synthetic materials are highly flammable and can quickly ignite from a spark from a flash bang or Molotov cocktail. When these materials burn they will melt right into your skin and cannot be removed without taking the skin with it.

A bicycle helmet, this can be a life saver in case agitators begin throwing rocks and you happen to be in the line of fire. Also useful as protection against police nightstick attacks.
A backpack, fill the book pocket, the pocket that is closest to the back straps, with a large hardcover book. This can act like body armor protecting your back from rubber bullets. In addition, it can be used as a shield by placing your forearm through the shoulder straps and holding the pack as a shield if front of you if you have to escape volleys of projectiles and rubber bullets. Do not have anything in the backpack that you can’t ditch if need be and try to be aware that it could also act as a handle for someone trying to grab you from behind.

A bandanna: can be used as an emergency bandage, sweat band, improvised dust mask, and washcloth.

Bring work gloves to protect your hands and help prevent burns if you have to remove smoking teargas canisters.

Wear work boots or hiking boots, or at least good high top leather runners. This is to help protect your feet from broken glass and sharp debris on the ground, and will help support your ankles when running, or climbing over barriers.

Wear protective eye-wear or preferably a gas mask if you have one. Swimming goggles or sports style sunglasses with padding on the inside such as used in racket ball and other sports works best. This is to protect against RCAs, rubber bullets and fragments from teargas canisters and Flash Bangs. Try to keep in mind that if the Riot Police have on gas masks, you should too. Riot Police usually only fire tear gas when they have their masks on. 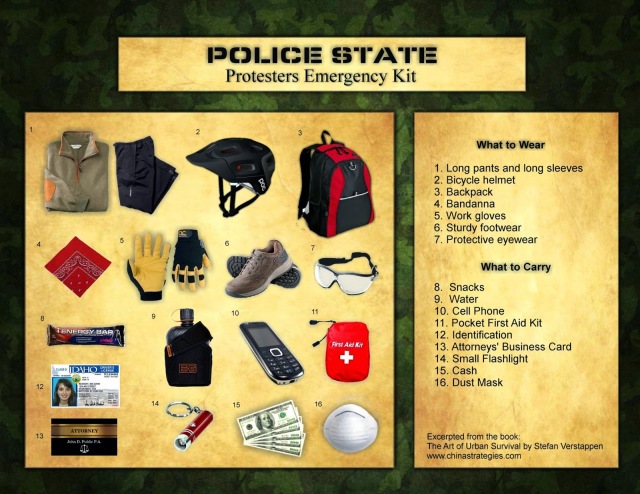 What to Carry
The riot police typically carry a lot of gear and it is a good idea for you to carry some items on your person as well.

Water: you can quickly become dehydrated standing outdoors and access to water may be restricted. Local stores may be closed for fear of rioting and looting and police may block off access to public fountains and washrooms. Bring 2 litres minimum and double if the temperatures are high.

Snacks: the excitement and physical exertion can quickly use up your glucose stores and leave you feeling weak and nauseous. Bring some snacks to nibble on through the day to maintain your blood sugar levels.

Cell Phone: to call for help, an attorney, or a cab to help you get out if you become trapped or arrested. A cell phone is also useful for filming the violation of human rights. Do not take your phone if you have information on it that you do not want the authorities to have or if you do not want to be identified as being at the protest. Recently it has been proven that police agencies will actively monitor the contents of every electronic communication in the area of an active protest.

Small Flashlight: in case you’re out after dark and the power goes out.

Cash: to pay for parking, or public transportation, or to hire a taxi.

Identification: in case you are detained or arrested providing I.D. can get you released sooner.

Write important phone numbers onto your skin with a magic marker should you be arrested. For example the National Lawyers Guild: For San Diego (619) 233-1701.

If you have an attorneys’ business card take it, but don’t rely solely on your cell phone for contact information since cell phones and other electronic devices will be seized should you be arrested.

Partner with someone who has your full name and date of birth should one of you be arrested the other can help provide your info to jail support.

How to Deal With Riot Control Agents
The term “riot control agents” (RCAs) refers to several gases commonly known as ‘Tear Gas’ or ‘Pepper Spray’. Exposure to these chemicals can cause skin, nose, and eye irritation, nausea, and respiratory difficulties within minutes. In rare cases, RCAs can cause long-term health complications, blindness, and even death. The effects generally last less than half an hour but can be extremely uncomfortable.

The first defense is to try to stay out of the line of fire and away from the front lines of the police. If the chemicals are released in front of you, you should move quickly straight behind you to get out of range. Try to get upwind of the point of release where there is fresh air.

If RCAs are deployed inside a building, get out as quickly as possible. The chemicals do not dissipate as they would outdoors, and the high concentrations can be extremely dangerous with prolonged exposure.

Get to high ground. RCAs are heavier than air, and the highest concentrations thus tend to be near the ground. Try to get to the highest point possible. This could be up a hill, atop a wall, etc.

If you are caught in a smoke cloud, soak a bandanna or other cloth in apple-cider vinegar or lemon juice and tightly cover your mouth and nose with it. (Bring these items in your kit.)

Finally, avoid wearing oil-based creams or sunscreens, as these aid absorption of the RCAs. If you are exposed to these agents follow decontamination procedures.

A spray bottle prepared ahead of time with a 50/50 mixture of an Antacid such as Maylox and water is one of the most effective pieces of gear to have during a tear gas attack. Not only for yourself, should you be affected by gas, but for all those around you who may be suffering and in need of immediate help. During an attack people should seek out those who are blinded and suffering to immediately spray their entire faces with the 50/50 mixture and lead them to safety.

-The objectives of the police are:

1) To break the spirit of the crowd by intimidating and breaking up the crowd into ‘manageable’ portions.

2) To provoke violence to justify their own actions and identify ‘leaders’.

3) Stop the march from spreading by surrounding the crowd.

Basic police choreography
With any rowdy crowd, the police will be trying to break it up. They will try to intimidate and disperse crowds using baton line charges, horse charges, vehicles, gases, rubber/wooden bullets and a few violent arrests. The dance steps will include one or more of these:

1) Cops in lines will surround you.

2) Either from the middle or one side, the cop lines will force everyone onto the sidewalk trying to create ‘spectators’ & ‘actors’ out of the crowd.

4) Loud speakers, and concussion grenades, to disorient and breakup the crowd.

5) Line charges will slowly push the crowd down the street to where they want you (a rush of cops, fall back, strengthen line and repeat).

6) The police cannot arrest large groups of people unless they have lots of little plastic handcuffs.

7) The police usually won’t use tear gas unless they have their own gas masks on.
Safe Marching tactics

Don’t incite violence. Remember the police are heavily armed and you are not.
When Marching: Don’t let yourself be intimidated onto the sidewalk. Police will push marches onto sidewalks in order to thin them out and divide them into smaller groups. Once the police force a march onto the sidewalk they can much more easily direct its movements and single people out for arrests.

Stop the lines from forming or surrounding you. Preventing you from going where you want to go, and pushing you down the street to where they want you to go, all require the police to be in a tight line. It is important to prevent the first lines from forming. If the crowd seems volatile, they will hold back and form their lines a distance away. But if the crowd is hanging around looking confused and passive they will sneak in and form the lines amongst you.

– form a cordon by linking arms in a way to protect the front and sides of the march from being divided. Flags and banners can be used for people to form a line and all hold on to.

– don’t look like you’ll let them anywhere near you.

– figure out where they want to go and either go someplace else or get there first.

– protect your escape routes by standing in front of them.

– get those people who turned into ‘spectators’ back into the crowd and moving around.

How to Leave the area
Try to leave in as large of a group as possible, groups of two or three are easy targets.

If you have to flee from a tear gas attack try to get upwind from the gas and remember that tear-gas stays close to the ground until it dissipates, so laying on the ground and covering up is not a good idea.

It can be dangerous to move against a crowd, so go with the flow until you are able to escape into a doorway or up a side street or alley. Stay with the crowd until you are certain you can safely escape because it will help you improve your odds of survival if shots are fired. In addition, police may barricade side routes and ambush anyone seeking to escape the main mob. You do not want to be the only person trying to get past a police barricade.
Avoid public transportation. Buses, subways, and trains will likely be out of service, and stations and depots may be packed with waiting police. Subway stations are particularly bad places to be, both because they are difficult to escape and because riot control agents are heavier than air and may drift down into subway stations and accumulate there.
Protect yourself and fellow activists.

You have the right to speak out. Both the California Constitution and the First Amendment to the United States Constitution protect your right to free expression. But there are many questions you face when you decide to organize and speak out. When do you need a police permit? Are there things you cannot say or do? Are there any limitations on when or where you can demonstrate? What about civil disobedience?

You might also want to print out this one-page .pdf

Are you a college student at a public university in California? This related 2-page Know Your Rights guide specifically addresses your right to practice civil disobedience on campus.