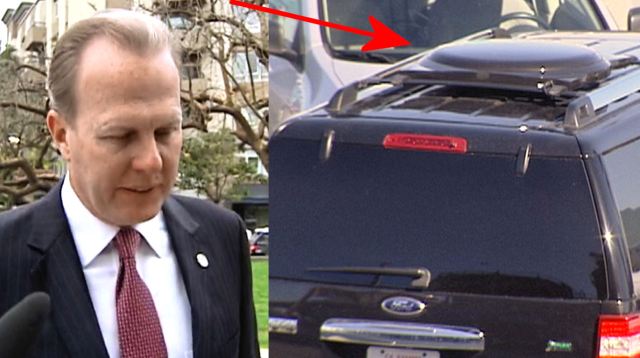 The officer, 16-year veteran Shannon Hart, is seeking unspecified damages of more than $10,000 in a claim he filed against the city late last year. U-T Watchdog received a copy of the claim this past week as part of a routine check of public records.

Hart alleges he was let go in retaliation for raising questions over U.S. Department of Homeland Security grant-spending decisions, among other things.

Specifically, Hart said he was told by superior officers at the chief’s insistence to buy a satellite-television dish for Faulconer’s city vehicle even though the expenditure did not meet terms of the federal grant. He said the purchase went forward despite his objection.

“SDPD’s motivation to terminate Officer Hart was enhanced by SDPD’s concern that Shannon Hart could and might disclose Chief Zimmerman’s and Mayor Faulconer’s false statements to the media when the satellite dish was discovered and reported, that Mayor Faulconer’s Expedition was authorized to carry a DirecTV satellite dish because it was a ‘command vehicle’,” the claim states.

CBS 8 reported last year that the mayor’s city-leased vehicle had been equipped with satellite television in 2014. The monthly cable subscription includes ESPN, NFL Sunday Ticket and other premium channels, the station reported.

In a statement responding to Hart’s claim, the department said the allegations are inaccurate and the equipment was paid for through normal budgetary channels.

“To be better prepared, shortly after she was appointed in 2014, Chief Shelley Zimmerman ordered the vehicle used by the mayor’s security detail to be outfitted with a satellite TV dish and a satellite phone for use by the Mayor since it is considered a mobile command center during an emergency,” the statement said.

“The installation was paid for out of the Police Department’s budget as is the ongoing monthly costs for a basic cable package,” the statement said. “No federal Homeland Security grant funding was spent on the satellite dish.”

A duplicate invoice provided by the department shows the city paid $3,580 in cash for a mobile satellite television dish and roof-rack system on April 2, 2014. Department officials did not respond to follow-up questions about why the receipt indicates the dish was paid for in cash.

Faulconer spokesman Matt Awbrey said in a statement that the mayor needs the equipment in case of emergency.

“When cell phones and electricity go dark in a disaster, this equipment allows command vehicle passengers, whether it’s the mayor or other high-ranking officials, to communicate with first responders and monitor developments remotely,” he wrote. “One of the lessons learned from the 2011 blackouts and emergencies faced in other cities is that having reliable methods of communication is critical.”

Awbrey did not respond to a follow-up question about Hart’s claim, which says satellite phones for Faulconer and Zimmerman did not comply with federal grant fund requirements that they be kept on hand at the city’s Emergency Operations Center.

Hart, who is represented by San Diego attorney Dan Gilleon, also said in his claim that he was fired for other reasons.

According to the claim, Hart was terminated because he suffered psychological distress after he “witnessed traumatic events on duty, including the deaths of fellow officers.” The department was further concerned that Hart might report misuse of city vehicles, the claim states.

The city has yet to formally approve or deny the claim. If the demand is rejected, Hart would be entitled to pursue his complaint in San Diego Superior Court.