“Luis Esquivel, in the PBSP SHU for 16 years, plaintiff in Ashker v. Brown, who spoke with U.N. Rapporteur on Torture Juan Mendez, when he visited PBSP as an expert witness for the federal lawsuit on behalf of 240 prisoners held in PBSP SHU over 10 years. The suit will go to trial in December 2015 in Oakland, and supporters will be encouraged to fill the courtroom each day.

Luis’ sister, Martha Esquivel of California Families Against Solitary Confinement (CFASC) in San Diego, sent the information on Luis – whom she calls a “warrior of life” – and stories about the torture the family has gone through, with heartbreaking visits through a window and denials of phone calls when family members were dying and even after the death of their brother, because he had died in Mexico.

Four years after the death of their mother, Luis told Martha “what the so-called counselor told him just minutes after I told my brother that my mom passed away. He said to him, ‘Your father is going to need you; your family is going to need you closer. Why don’t you take advantage of debriefing?’ This is how CDCr gives rehabilitation, this is how they help?” Luis never debriefed.”

[This article was first published March 28, 2015 in the San Francisco Bay View ]

Statewide Coordinated Actions to End Solitary Confinement (SCATESC) began March 23, 2015. Actions were held in California from San Diego to Arcata (Arcata-Eureka, Los Angeles, Oakland, San Diego, San Jose, Santa Cruz) and Philadelphia, Penn. Activists in more locations will be joining in on April 23 and the 23rd of each month. Below is a report from just one locality, Santa Cruz, which took a creative approach.

About 45 people attended the first day of Statewide Coordinated Actions to End Solitary Confinement (SCATESC), on March 23, 2015, at the Lighthouse on West Cliff Drive in Santa Cruz. We went there to see the ocean for so many SHU and solitary prisoners who talk about their dream to see the ocean again, including Luis Esquivel. 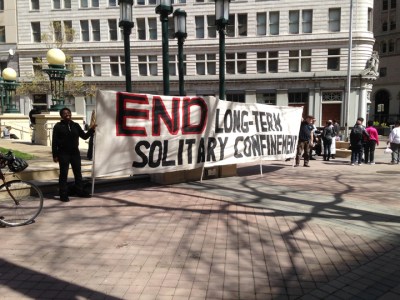