United Against Police Terror and San Diego Fight for 15 – Lucha por 15
“The same people being constantly victimized by police brutality are also being consistently victimized by deprivation of resources and not having access to living wage jobs,”
-Montague Simmons, Organization for Black Struggle

in City Heights about 54 percent of the population is latino, 16 percent is Asian and 16 percent are African or African American. According to the 2000 census, 44 percent of City Height’s population is foreign born, home to many immigrants and refugees fleeing violence in their homelands: Ethnic Albanians from Kosovo, Central Americans, East Africans, and Kurds. More than 30 languages and 80 dialects are now spoken in City Heights.. It also is home to high unemployment, poverty and criminalization.

The average household income is $26,538, below the poverty line.

Africans, African-Americans and Latinos have been displaced to City Heights and like areas by gentrification due to high rent.

Blacks are stopped twice as often as their driving age demographic representation and are searched at three times – and Latinos at twice – the rate of Whites.

Racial profiling, also in the form of curfew sweeps and gang documentation make engaging in activities that are normally considered innocent, such as walking, and being out after certain hours, unlawful. Having such a record makes it hard for people to get and keep a legitimate job, attend school and maintain their housing. Often forcing people back onto the streets in order to survive.

City Heights has the highest concentration of nonprofit service providers in San Diego County, with more than $265 million invested in service providers, but little evidence shows they’ve improved the lives of residents.

So Low wage workers, students, communities will be rising to demand living wages and justice for our people!

WE RISE UP for Good Jobs & Self Sufficiency 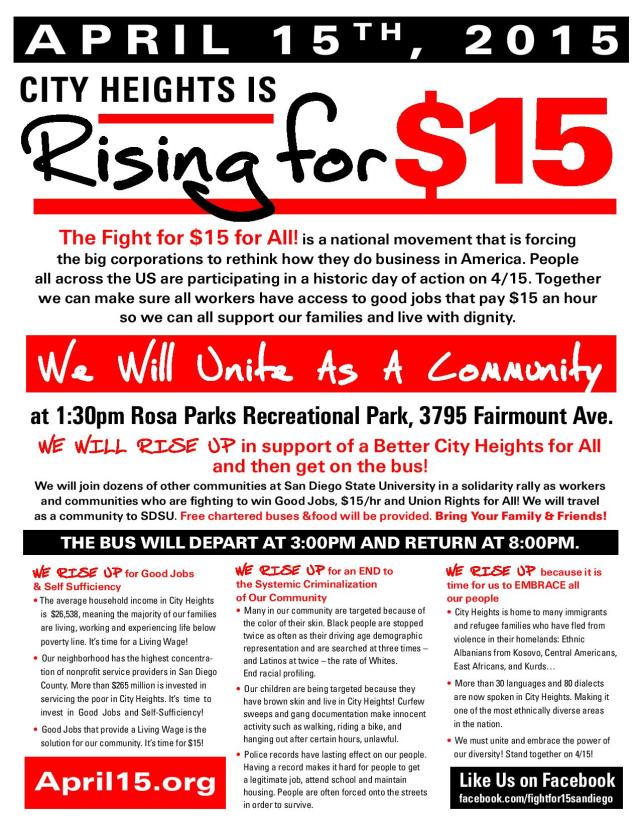 The Fight for $15 for All! is a national movement that is forcing the big corporations to rethink how they do business in America. People all across the US are participating in a historic day of action on 4/15.